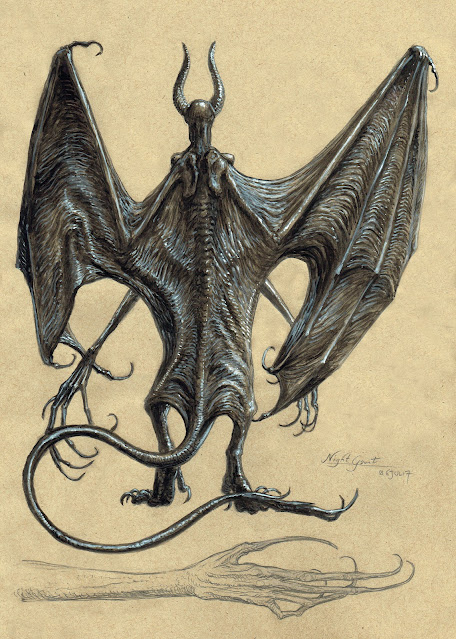 Salutations! A word I learned from Charlotte. Midjourney. That thing that every artist friend of yours is posting instead of their own work, and I see that it's got some people uptight - threatening to block anyone who posts Midjourney results, and such. I kind of get it, but I really do see this as an exploratory tool. It's like being able to talk to your tv and have it create a show for you....except that you have to type in a strange prompting language and it only creates still images. Believe me, an a.i. multimedia creation platform is on the way. Just think of the porn- and I know you did.

So, I'm pretty familiar with H.P. Lovecraft's night-gaunt, so when I was able to access the Midjourney Beta, it's one of the first things I tried to have it create. And tried. Annnnd tried. You shall now bear witness to my toils- and they weren't ever really toils,  as I enjoyed every result for one reason or another. So, let's jump in. 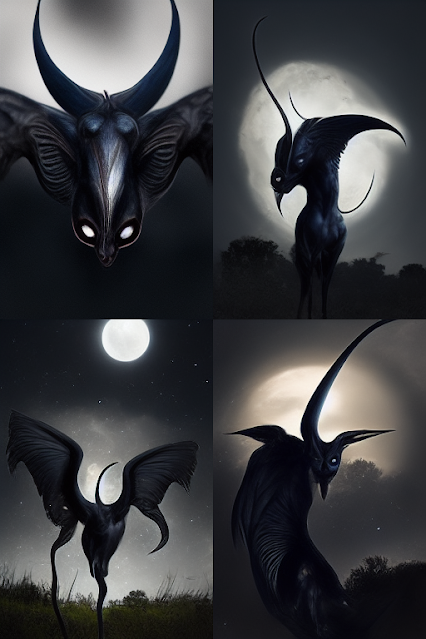 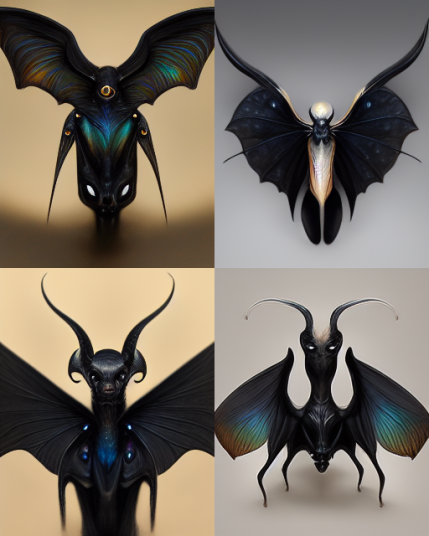 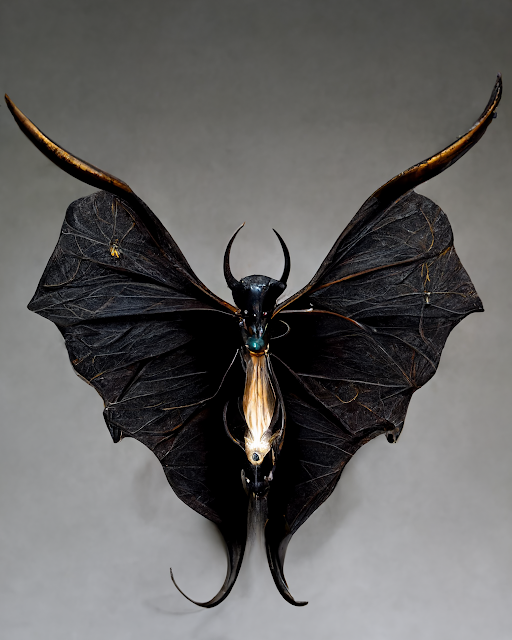 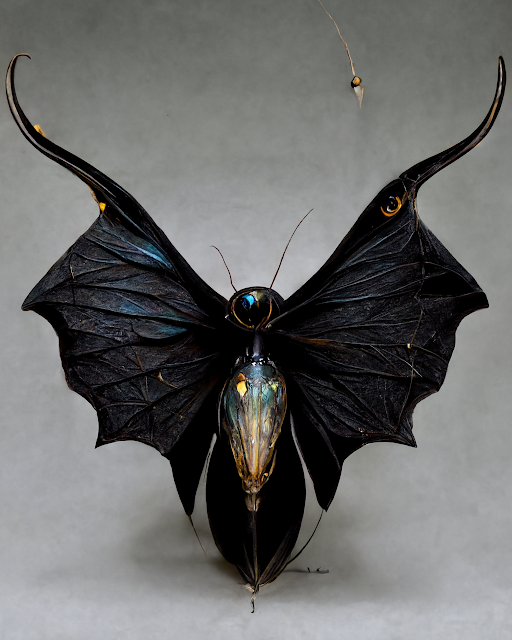 So, we never got a true night-gaunt. Actually, never really thought we would, so I was very pleased with the fever dream versions we got. I even like the small gallery of Dreamworld butterflies we ended up with. Maybe as I learn the prompts better, I can get closer. We got pretty close tonight, and apps like this are only going to get better. I'm not out of a job yet, though.
Posted by Kurt Komoda at 3:06 AM No comments:

Of Ghouls and Graveyards, Lovecraft in Providence 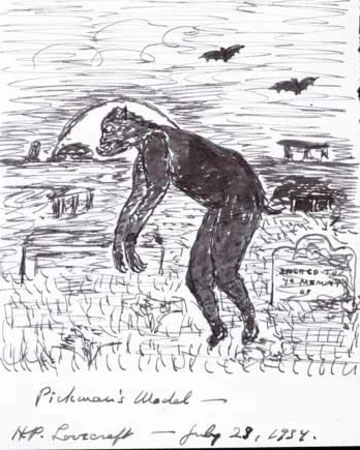 Pickman's Model, a July 28,1934 drawing of a ghoul by Lovecraft, himself. There are two ghoul drawings done by Lovecraft that I know of. The first is dated one month earlier, June 21, 1934 (below). Both feature a ghoul in a graveyard with a Boxer-like underbite and a small tail. Interestingly, neither of these features are mentioned in Lovecraft's descriptions of a ghoul. The ghoul in the earlier drawing features some sort of skin texture, which could be a lumps or fur- possibly both.

Now, I've already covered my interpretation of the Lovecraftian ghoul in a previous blog post, Ghastly Ghouly : H.P. Lovecraft's Ghouls and Ghasts, so this post is more about a fun detail in the second drawing: the tombstone. Unfortunately, I cannot find a higher-res version of this drawing online, but I believe it comes from a publication of Lovecraft's letters, so I may have to track that down. The tombstone in the lower right features a winged cherub head and an inscription. 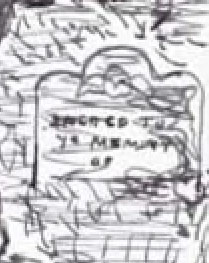 Now, it's a bit hard to make out, but it reads: SACRED TO THE MEMORY OF. Now, this inscription is hardly unique and neither is the winged cherub head nor even the shouldered shape of the tombstone. All three together IS, however, notable, and I hope to explain why.
Here is a photo of ol'Howard Phillips himself, photographed on a stroll through the St. John's Cemetery at the Cathedral of St. John, in Providence, Rhode Island- not far from where he lived at the time. It's a small cemetery, with the path cutting in from Benefit Street (behind Lovecraft in the photo) and going down a slope towards North Main Street and the cathedral.
Okay, now bear with me. See where Lovecraft is standing? Well, of course you do, but let me further illustrate my point by doing something I haven't done in a long, long time: create a moving gif! Behold!

Pretty neat, eh? EH? Okay, so it doesn't really tell you much except that I was there, trying to match up my shot with a different type of lens and it only kinda sorta worked. So, if we start from where he was standing and pull back a bit, we see a set of tombstones on the left, which Lovecraft would have been able to see on his walks through the cemetery. 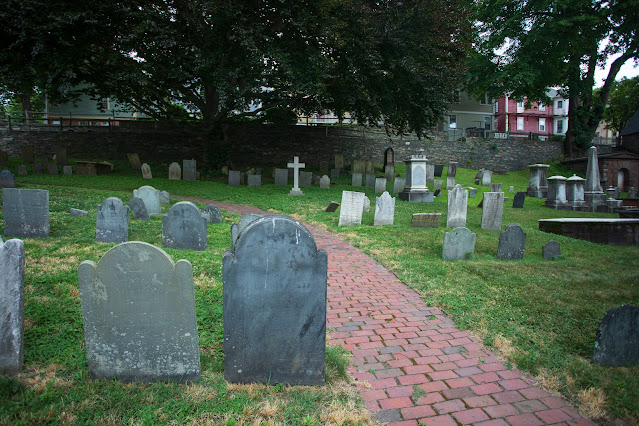 Well, okay, he would have seen them on his walk back up the hill towards Benefit Street. What we're interested here is the tombstone on the right: the grave of one Mrs. Deborah Checkley Paget, born 1718, died 15 April 1793, but as far as I know, that's not important. 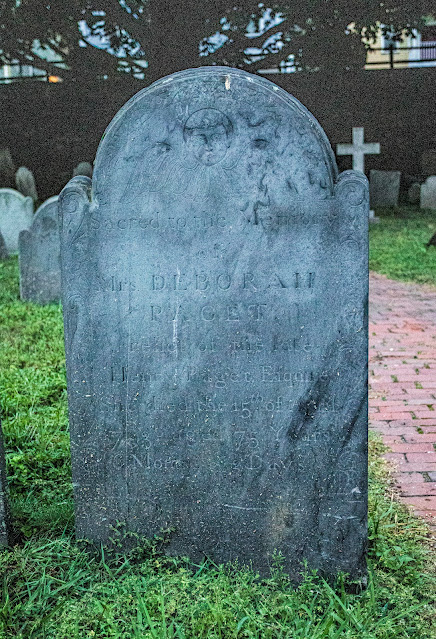 What is important are the inscription and engraving at the top. Can't make it out? ENHANCE! 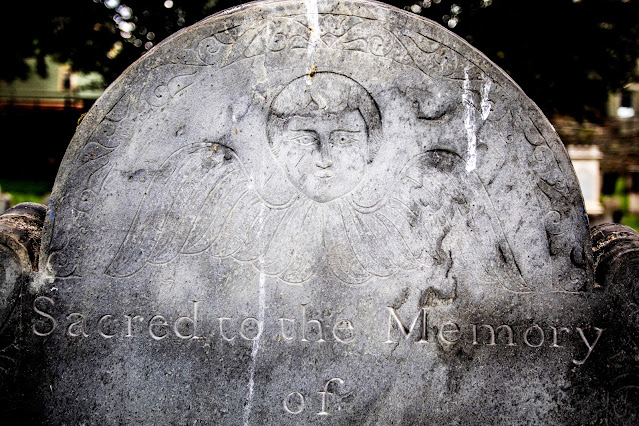 That's right, folks. Y'all saw where this was going. It's the tombstone from the drawing....at least that's my theory. We've looked around, and there was no other combination of a shouldered marker, winged cherub, and Sacred to the Memory of inscription in the cemetery. The cemetery in the drawings includes lawn crypts and what looks like a distant mausoleum, so it certainly isn't supposed to be the St. John's Cemetery, but that's okay. What does this all mean? Ehhhhh probably not much except that Lovecraft would have seen this grave on his walks and maybe he just remembered it for his drawing. STILL, I find it kind of neat.
********
While I've got you here in the cemetery, I may as well show you something else, so sit yerself right back down and grab a nice cold Clamato and some year-old Toffifay I bought in bulk.
The One-Winged Angel 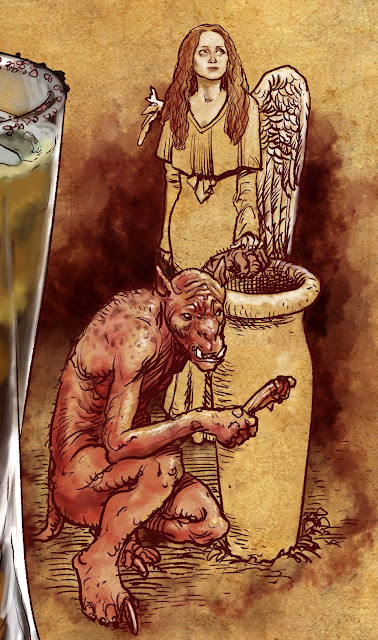 So I illustrated a Lovecraftian drink recipe book, Lovecraft Cocktails- available in fine book stores everywhere! - and on one of the pages I decided I decorate it all pretty with the image of our dear Mrs. Paget's tombstone. Now, close by the Paget grave was a small eroded statuette of an angel and an urn for flowers. From the photos I took in July of 2019, I thought she only had one wing (upper right), so I thought, "Oh, that's neat. I shall depict my recently departed friend, Leslie, as this one-winged angel. Aren't I clever?" Well, a return trip to the spot in 2021 revealed that the angel did, in fact, have two wings, they were just angled off to one side, for some reason (lower right). 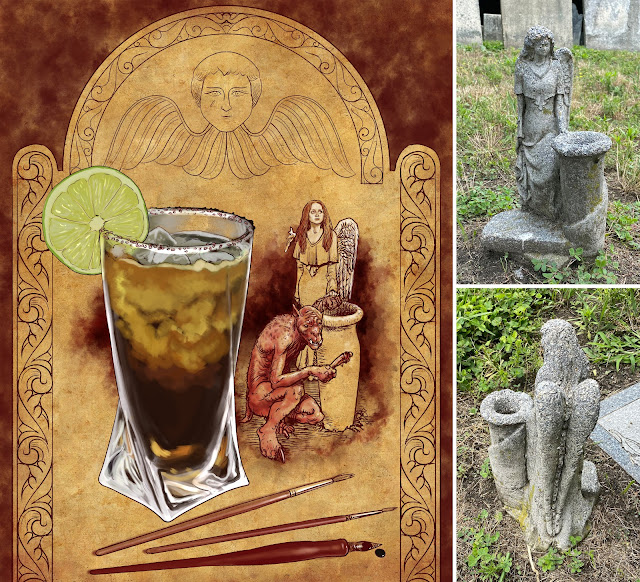 Why are the wings cocked to one side like that, though? Maybe there was more to the grave that is now gone. I still like the image of the one-winged angel well enough, even if it was erroneously inspired.
Posted by Kurt Komoda at 7:40 AM No comments:

Yes, I'm playing Pokémon Go, but the only part I seem to enjoy is collecting the monsters. 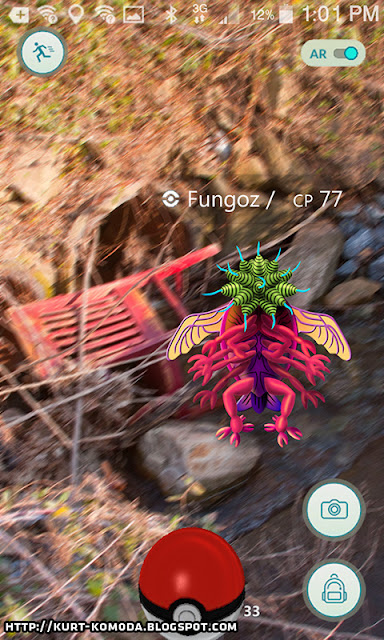 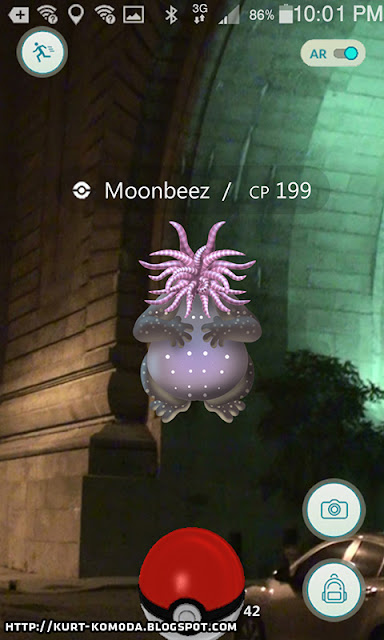 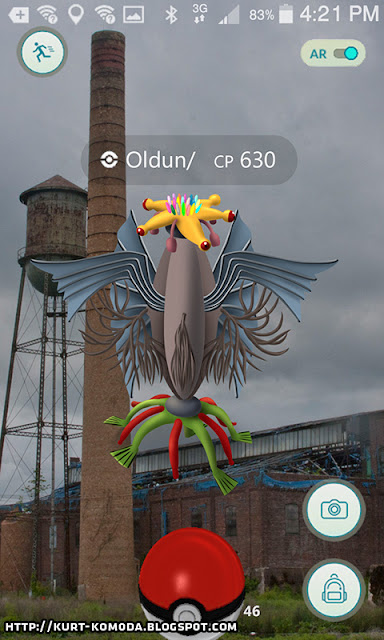 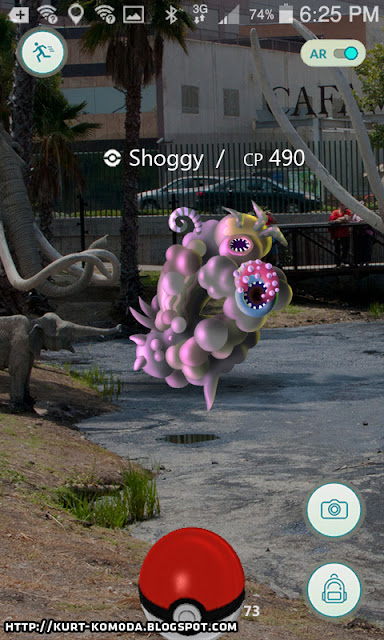 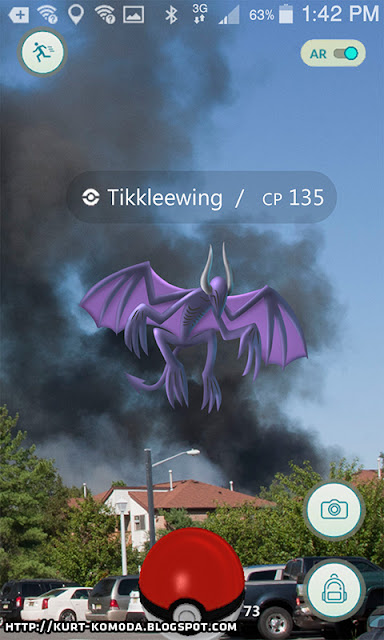 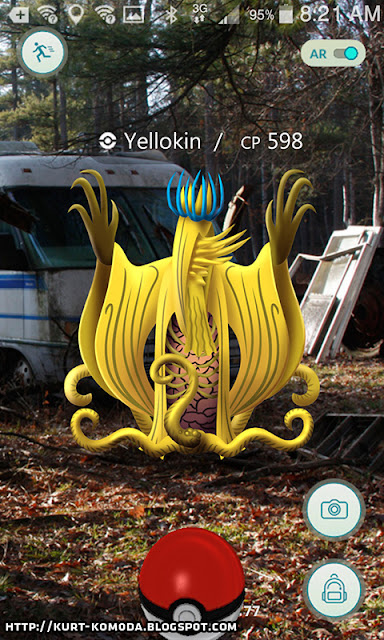 Oh, I wish I could create and place my own monsters into Pokémon Go. Thing is, if everyone could do that, there would be a lot of penis monsters.
Posted by Kurt Komoda at 4:16 AM No comments: