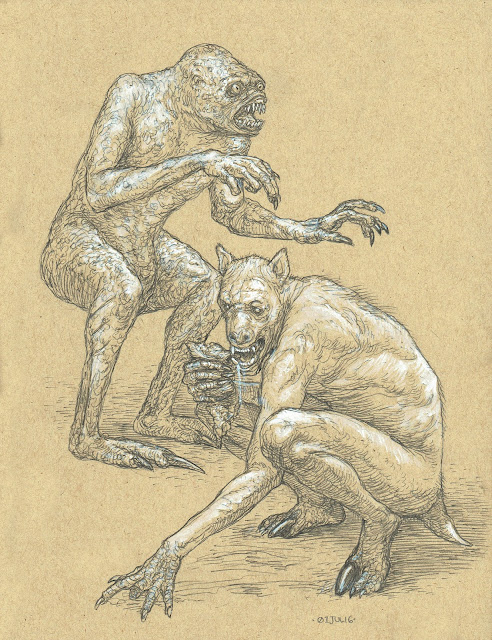 My original plan was to handle the ghast, gug, and ghoul all in one post, since they all converge at one point in Lovecraft's Dream Quest of Unknown Kadath, but as I was writing and drawing I found that I was going on and on about the gug, leaving no room for the other two. A better pairing might have been the ghast and the gug, since they appeared to be enemies of old, with the ghouls trying to avoid them both- but, here we are. One commonality between the ghast and the ghoul (aside from both of them starting with "gh") is that they're both basically slumped anthropomorphic naked things with claws and sharp teeth. Even though the story makes them quite distinct from one another, I had them both confused for a long time. The first time I tried drawing them was ten years ago, in 2006:


Of course, now I find it quite easy to distinguish the two species and have some difficulty in comprehending how I had previously muddled them together. The most distinguishing feature of the ghoul is its canine-like head. In Arabic folklore, the ghūl is a type of jinni, a spawn of Iblis (the Devil). First mentioned in One Thousand and One Nights, it is associated with graveyards and the consumption of human flesh, but it is also known as a desert-dwelling shape shifter that can assume the appearance of any animal, but especially the hyena. The hyena has been linked with the ghoul partly because of its tendency to dig up graves to devour human flesh but also because of the trickster nature attached to it, no doubt helped by the hyena's ability to create sounds that sound like human laughter or crying. I believe that Lovecraft may have drawn from this particular bit of folklore. That the ghouls communicate through a series of glibbers and meeps (as opposed to the ghasts, who communicate in the coughing gutterals  of their Pnathic language) further supports this.

An article containing an interesting bit about the ghoul and its relation to the hyena in Arabic sources HERE.

Interesting history of the ghoul HERE. 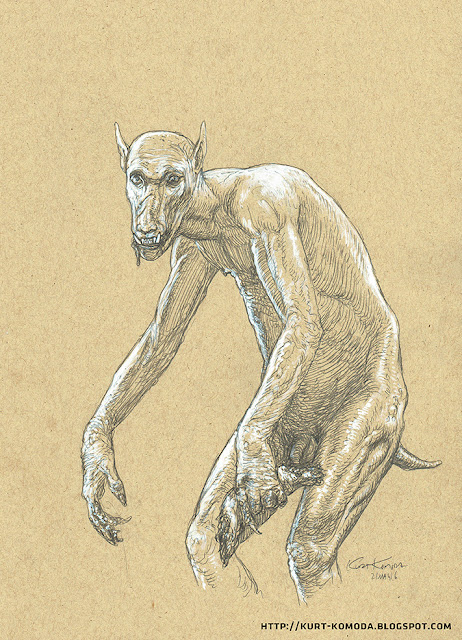 The ghouls are described as having rubbery skin that ranges from white to green. Initially, I was drawing them completely hairless, but in later drawings (meaning this week) I've begun to add sparse hairs in certain spots to give them a grungier look. I used a lot of photos of hairless dogs as reference. They have bloodshot eyes, great fangs, pointed ears, flat noses, and scaled claws (like a bird of prey or a reptile, I suppose). Of great help was a drawing of a ghoul by Lovecraft, himself- something that he apparently drew for Pickman's Model. You'll notice the jutting lower jaw, underbite fangs, and that short tail- none of which are mentioned at all in the texts. Edit 28JUL22- I have a new blog post that examines this drawing closer right here--> Of Ghouls and Graveyards: Lovecraft in Providence 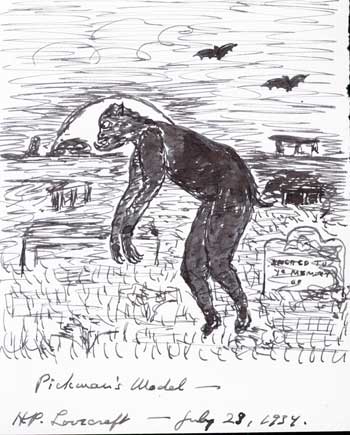 Lovecraft's drawing of a ghoul. 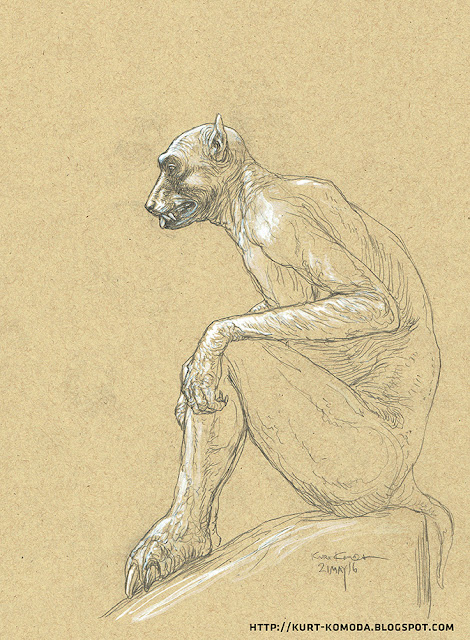 Of particular interest is the fact that the ghouls are transformed humans, but by what process, I know not. In Pickman's Model, ghouls are seen depicted in a painting training an abducted human child to eat as they do, turning the child into one of them. Another painting depicts a matured changeling- a ghoul baby left in place of a stolen human baby- sitting amongst its Puritan family, curiously displaying features similar to Pickman, himself, who later appears as a ghoul in The Dream Quest of Unknown Kadath.  I'm not sure if that meant to infer that he was already a ghoul (that he was a changeling) or if it was just something he desired. Incidentally, we never hear of female ghouls- though, I can assume that they exist.

Now, the ghast is something I was sure I'd find in folklore, but apparently, this is a case where the word existed- Middle English: gast "afraid" 1350-1400- and then the monster came later. "Ghast" is an obsolete term for "to frighten,"and then, of course, ghastly, aghast, and beghast. As far as I can tell, we have Lovecraft using it for his beasties and then....Minecraft. Someone please correct me if I missed the actual origin

Of course, Lovecraft's ghasts came first and aren't giant floating cubes with tentacles that make monstrous baby sounds and shoot fireballs- which really makes me wonder why Mojang, the developers of Minecraft, decided to call that thing a Ghast in the first place. Lovecraft's ghasts are humanoid, about the size of a small horse, and possess long legs with which they hop about like kangaroos. Their coloration is never mentioned, but their bodies are described as filthy and scabrous. For some reason, I always had the impression that they were a sickly grey color, but there isn't anything to justify this. We can be reasonably sure that they weren't any garish color and didn't have any obvious patterning, like stripes or spots, i.e. if they were bright purple with yellow feet and green spots, Lovecraft would most surely have pointed this out. 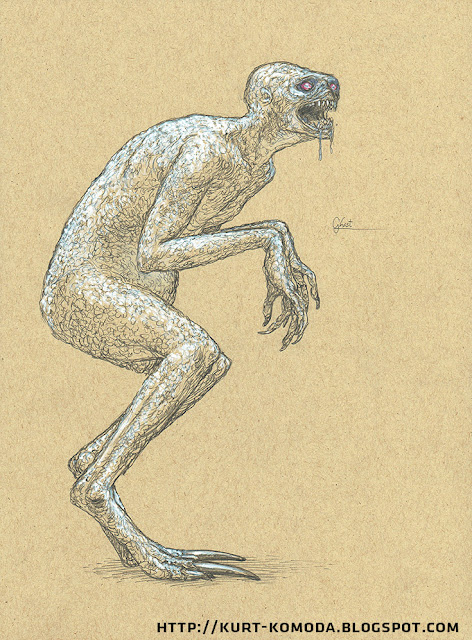 As for the ghast's head, they have a face that "is so curiously human despite the absence of a nose, a forehead, and other important particulars." When I eliminate the nose and the forehead, a lot of my attempts tend to look too reptilian, which I don't want. 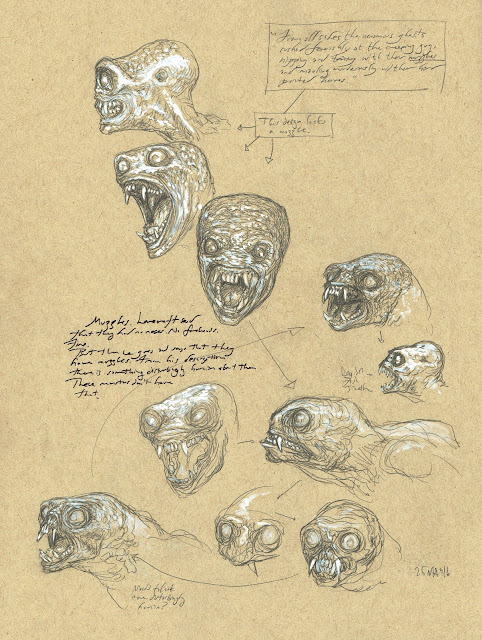 I kept getting this reptilian snake-man look when drawing the head, but then my brother sent me this picture of a man with severe facial disfigurement from World War I:\ 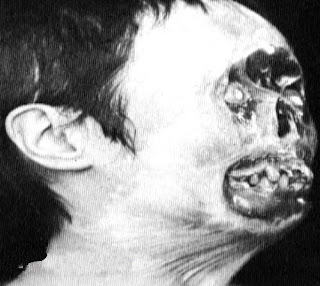 No disrespect for the man in the photo, but something about it was on the level of being disturbing that I wanted for the ghast. The photo might be squashed down vertically a bit, but the compressed shape may have been part of why it reminded me of the ghast. The horrible eyes, definite absence of a nose, receding forehead, the protruding teeth, and the way that the flesh of the neck just stretches onto the small lower jaw: all seem to me to be crucial elements for the ghast.

From the beginning, I've always drawn the ghast with big, round luminous eyes. Not sure if that's right, but I seem to be stuck on them. Originally, I drew them with very flat faces- just eyes over a gaping mouth, but then there's this bit in Dream Quest where it describes them as biting the gug sentry with their muzzles. So, I've been trying to draw them with the mouth protruding from the face a bit. The fact that they're venomous makes me give them sharp reptilian teeth. Even though I don't always depict them, I figure they must have nostrils, for they are supposed to possess an acute sense of smell. Ears: not sure, so I tend to draw them very small or not at all. I give them this slightly bulbous cranium, and strangely, that was mostly because when I was drawing them, they were looking a lot like a demonic version of E.T., from the Spielberg movie.

The good thing about ghasts- and, in fact, all the Lovecraft monsters I've drawn, is that they're a species, so they're allowed to look different from one another. There could be a variety of head shapes within the limitations of the description. The image below shows rather silly drawings, but it shows how I was playing around with the ghast's face. 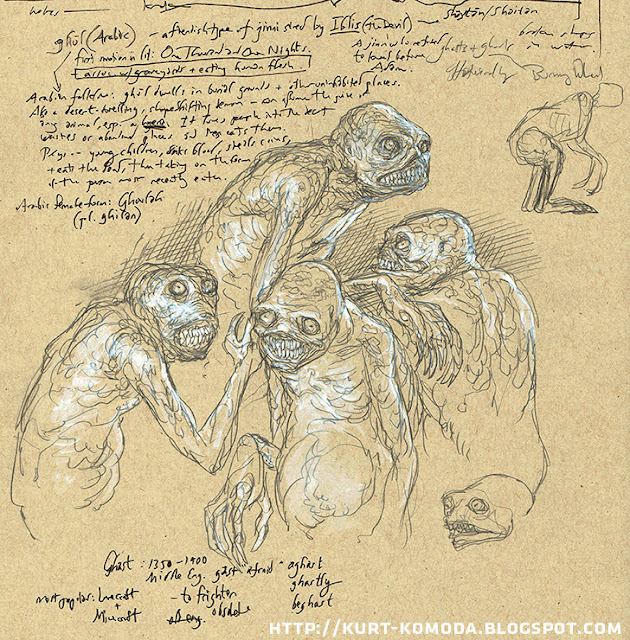 The ghast's legs are pretty straightforward, though I keep drawing them slightly differently- and I keep forgetting to make them long enough. They're basically just hairless kangaroo legs, complete with the sharp hooves- especially that long center hoof-claw.

As far as culture, the ghasts appear to have none. They're described as primitive beasts who hunt the gugs in packs- and the gugs, in return, hunt the ghasts in the darkness of the vaults of Zin. The ghasts communicate through coughing gutterals, but this by no means assures that they have a working language. Female ghasts? No idea. I don't suppose that ghasts just sprout out of the ground or reproduce by budding, so I suppose that they're should be some form of sexual reproduction. Well, in Lovecraft literature, unless we're talking about a witch, no females are mentioned. Asenath Waite Derby, from The Thing on the Doorstep doesn't count, because she was a female body possessed by a male throughout the story. Oops. Spoilers.

Okay, that's about it for this post. Oh, one more thing. Here's a little size comparison chart I drew the other day of all the monsters I've done so far in this series:

Not sure what's next. I may do a non-Lovecraftian beastie or two, since there are a bunch I already have a load of drawings for. If you're interested in purchasing any of the drawings you see in this blog, just contact me at agony@optonline.net. Not all drawings are available, and some of them aren't even actual drawings or have been reworked in Photoshop. Until next time, bye-bye! 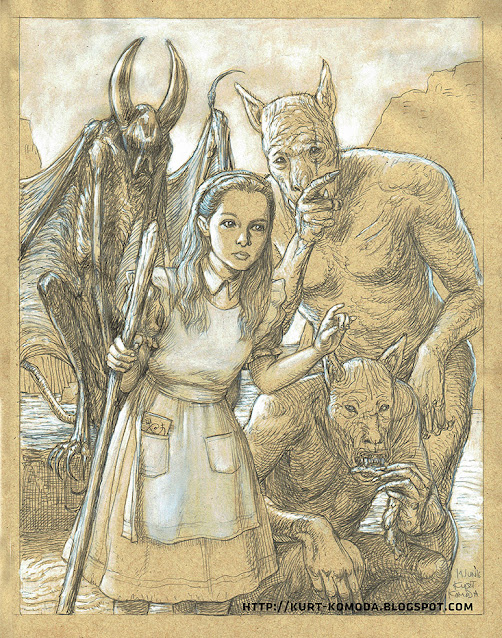 Alice in the Dreamlands