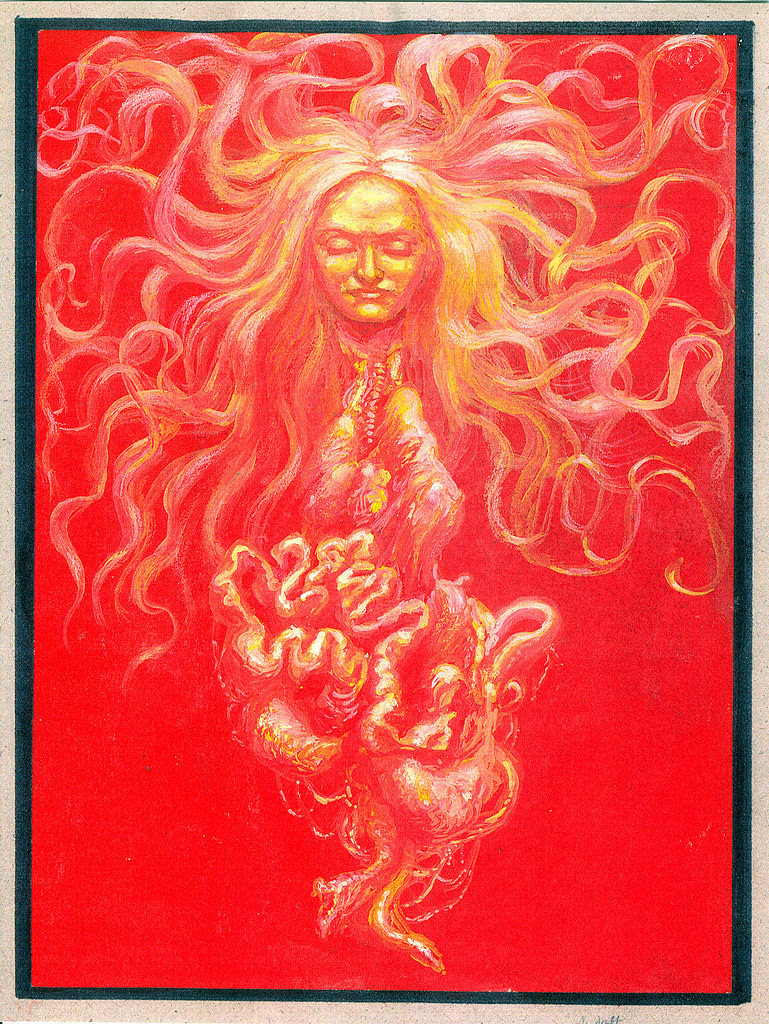 Hello! I just posted some of my Penanggalan drawings over at Eaten By Ducks, but I was concerned with keeping it brief and not hogging up the page. Here, however, I can do whatever I want. So, let's begin. 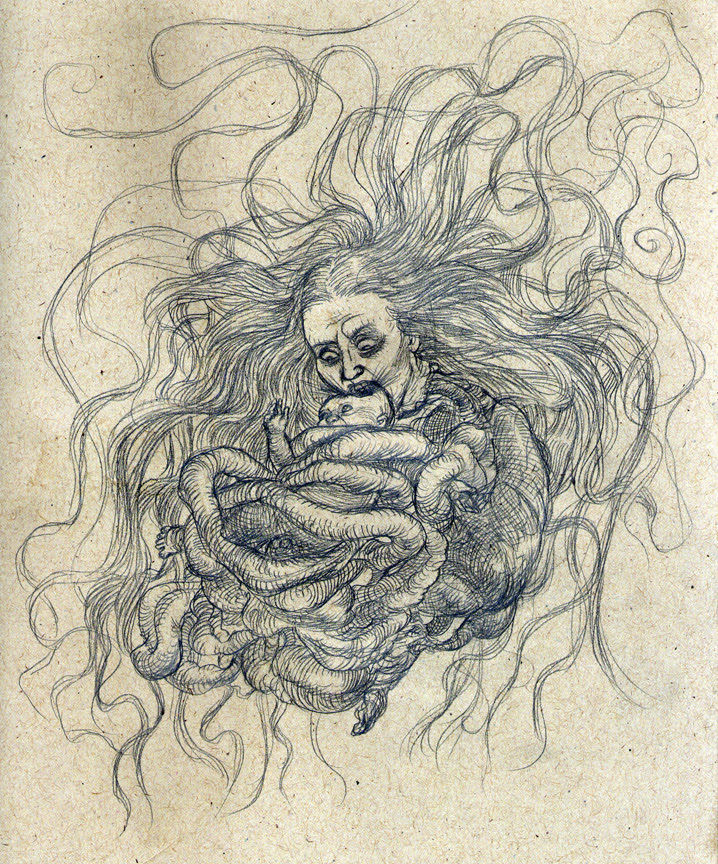 My fascination with the Penanggalan began back in the 80's, when I first saw her mentioned in The Fiend Folio, an Advanced Dungeons & Dragons monster compendium. Essentially, the Penanggalan is a female vampire from Malaysian folklore, consisting only of her floating head and a complete set of organs dangling from her torn neck.  Though no folklore source specifically states  this, she uses her long hair and innards as tentacles. Her innards are swollen- for some reason- and glow slightly from a slimy fluid that surrounds them and drips to the ground constantly. She embodies absolute foulness. 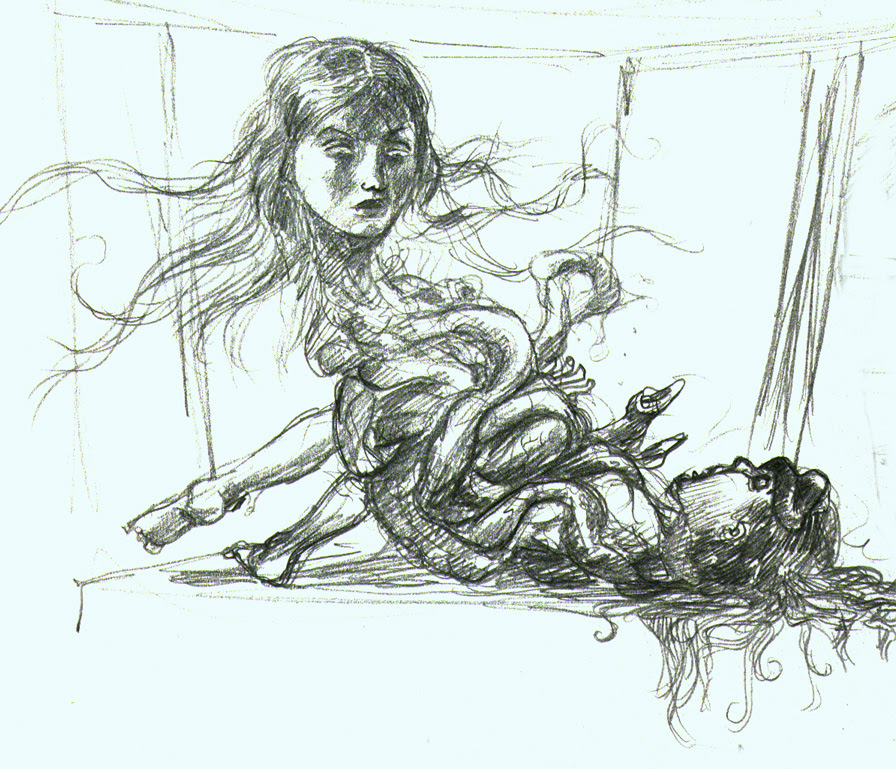 According to legend, the Penanggalan was created thusly : a woman, while seated in a large wooden vat, used for holding vinegar distilled from the sap of the thatch palm (menyadap nipah) performing a religious penance (dudok bertrapa), is interupted by a man who asks what she is doing. She is so utterly startled that she jumps up, her head literally popping off of her body. The severed head, along with the entrails, which follow it through the neck opening, flies up into a nearby tree, shreiking. Ever since then, she existed as the Penanggalan, an evil spirit that has a certain weakness for newborn blood. You could protect your house by surrounding it with a thistle called Jeruju, which could ensnare the Penanggalan, trapping her until the morning when she was more vulnerable. It's not a very good story. It could use some elaboration. Ohhh, I did I ever elaborate on this. Examine these two pages from a 1994 sketchbook: In Malaysian folklore, the Penanggalan, hungry for the flesh of young children and babies, would separate from her body and fly over to her victim's house, go under it, and then come up through the floor to eat the child. Upon returning to her hidden torso, she would need to soak her swollen innards in a vat of vinegar(likely the same vat described in the origin story) to shrink them down enough to fit back into the neck hole and abdomen. I always wondered just how much of her insides she would actually take along with her. Obviously, lungs, heart, stomach, liver, kidneys, intestines- you know, the big ones. But what about her circulatory system? What about parts that lead to outside orifices, like the anus and vagina? In my drawings, I included those, but omitted most of the circulatory system- including only those embedded into the organs. I never went into enough detail to figure out at what point the arteries from the heart just simply cut off. If we are to accept the concept of a floating head and entrails, then I think it's okay to dispense with most other biological necessities. 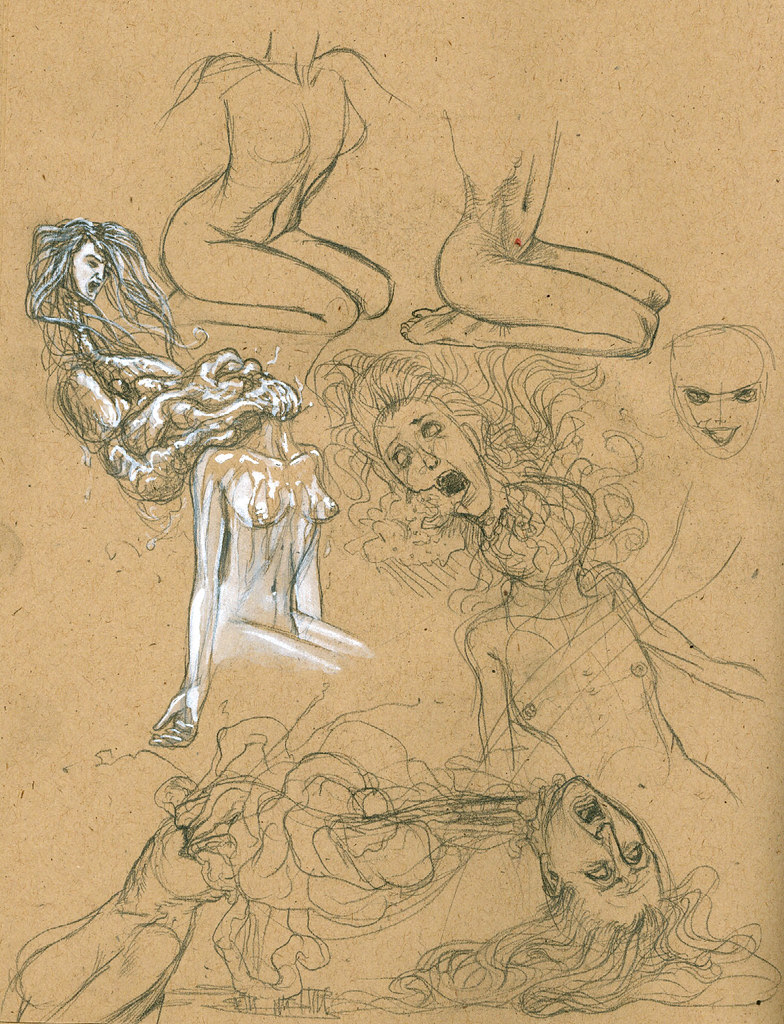 I my story, which was somehow going to be interwoven into my Agony a Go-Go story, the Penanggalan live in a hidden lair, protected by servants of the Mother Penanggalan, both human and otherwise. In my version, it is Penanggalan's own glowing slime secretion upon the earth that creates the special thorny plant that can ensnare her entrails and hair. Since this plant would grow in abundance around the lair, there are special servants which must constantly destroy it. 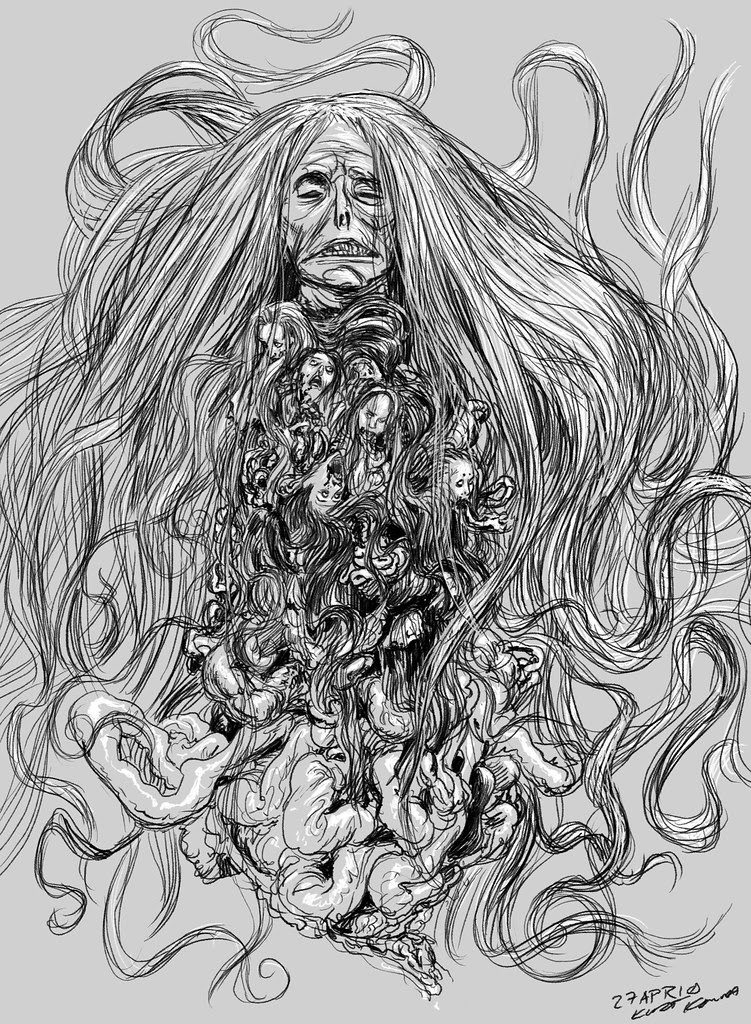 So, above is the Mother Penanggalan. I forgot to scan in any of my old sketches, so I quickly drew this in Photoshop. I guess it's a tad bit ridiculous, but my original thought was that the Mother was the original Penanggalan, from Malaysia. Her body has long since been discarded and her Penanggalan form has grown and mutated. She has incorporated lesser Penanggalan into her form. At one point, I even had the snarling heads of tigers and wolves floating and snapping about, connected to the bottom of the Mother. Another idea was that she had no more working organs of her own, and used her "guests" life systems to support her own. 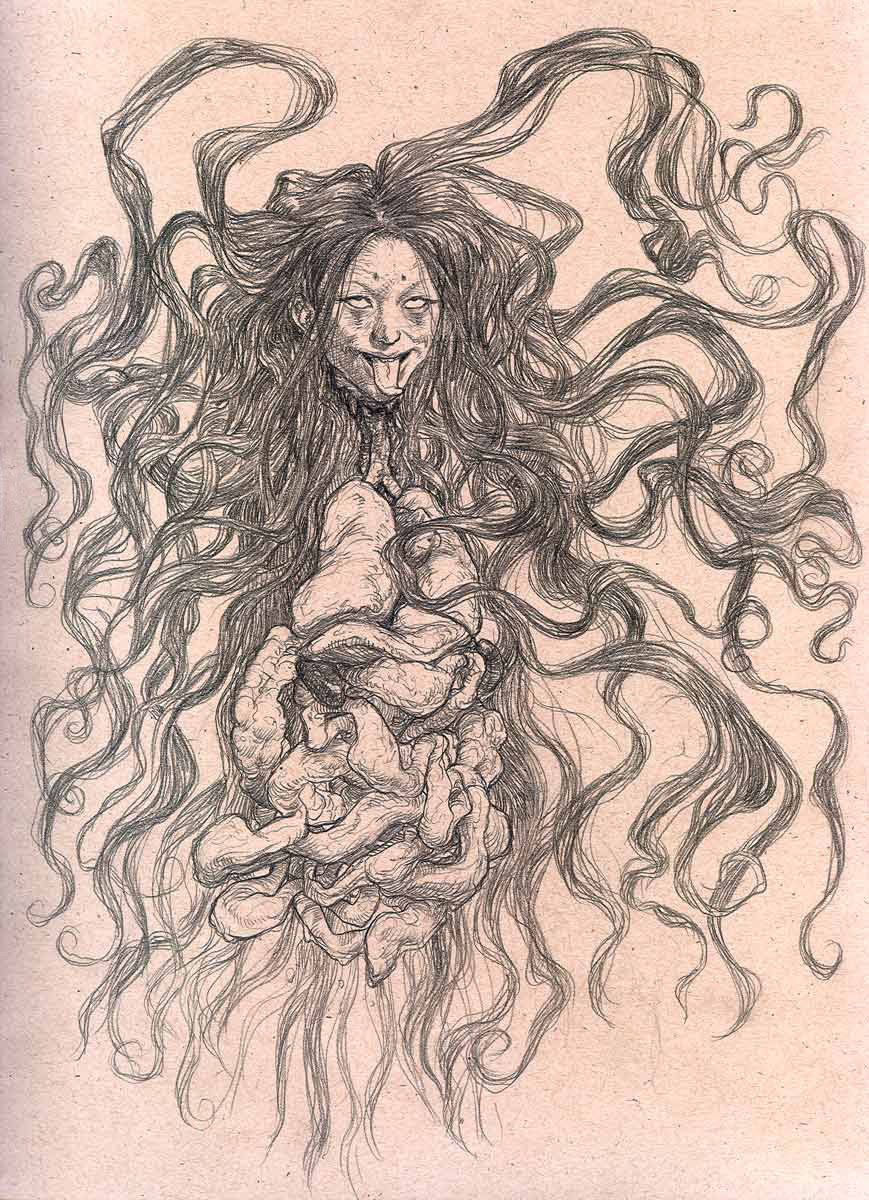 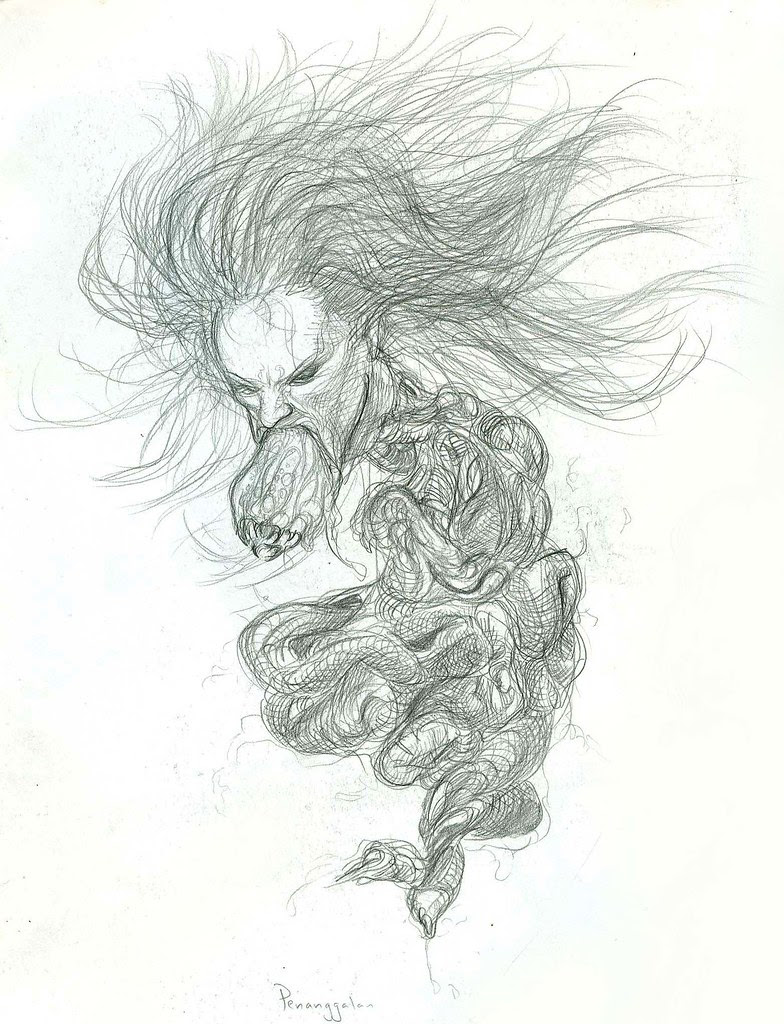 The mouth proboscis was something my brother, Paul Komoda, came up with. I don't know if he ever drew it, but he talked about it. It was inspired by the bloodworms we used to use for bait, whose black fanged mouths shot out of them with ferocious speed, like the guts of something soft being crushed. 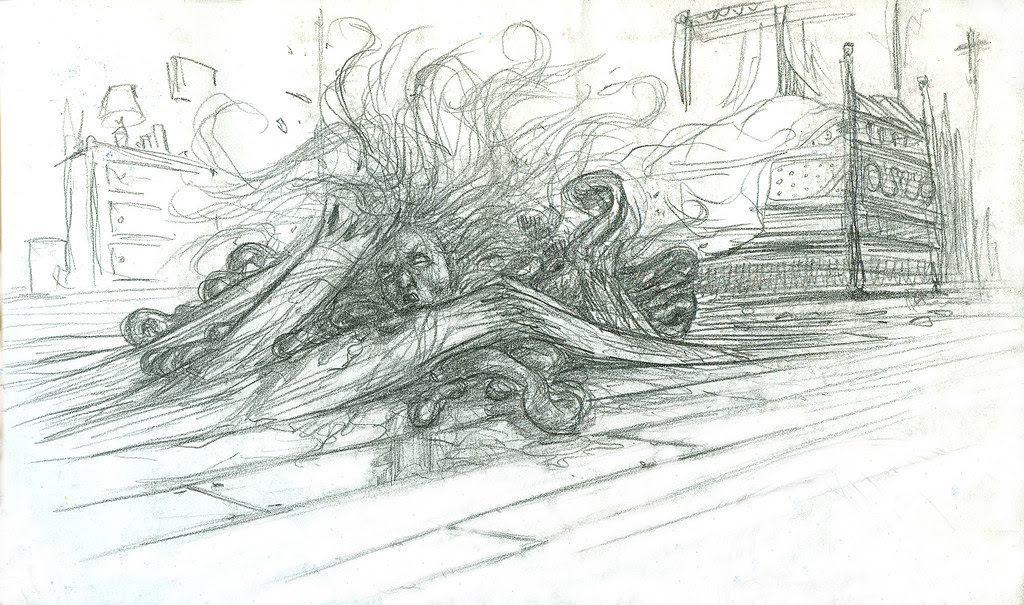 According to folklore, the Penanggalan would attack her sleeping child victims by going under the house and coming up through the floor. The above sketch doesn't show a South East Asian abode, but does depict the power of the Penanggalan. 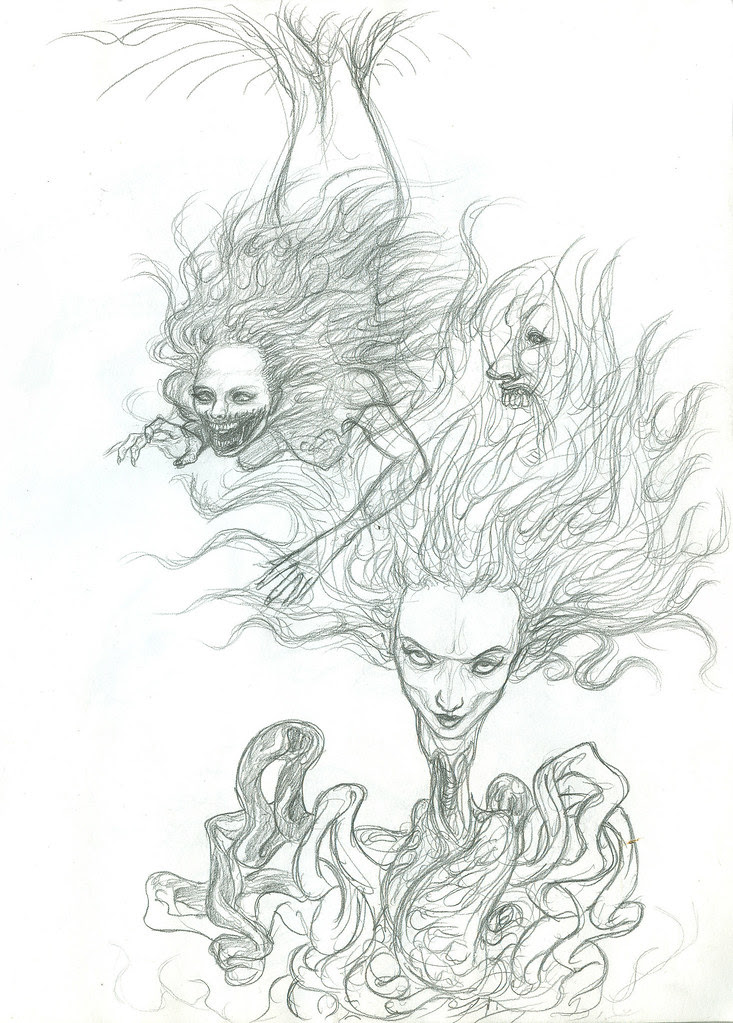 Concerning the sketch above, I don't know what the thing at the top is. I was just doodling. Here, the Penanggalan has uncharacteristic flame-like hair. 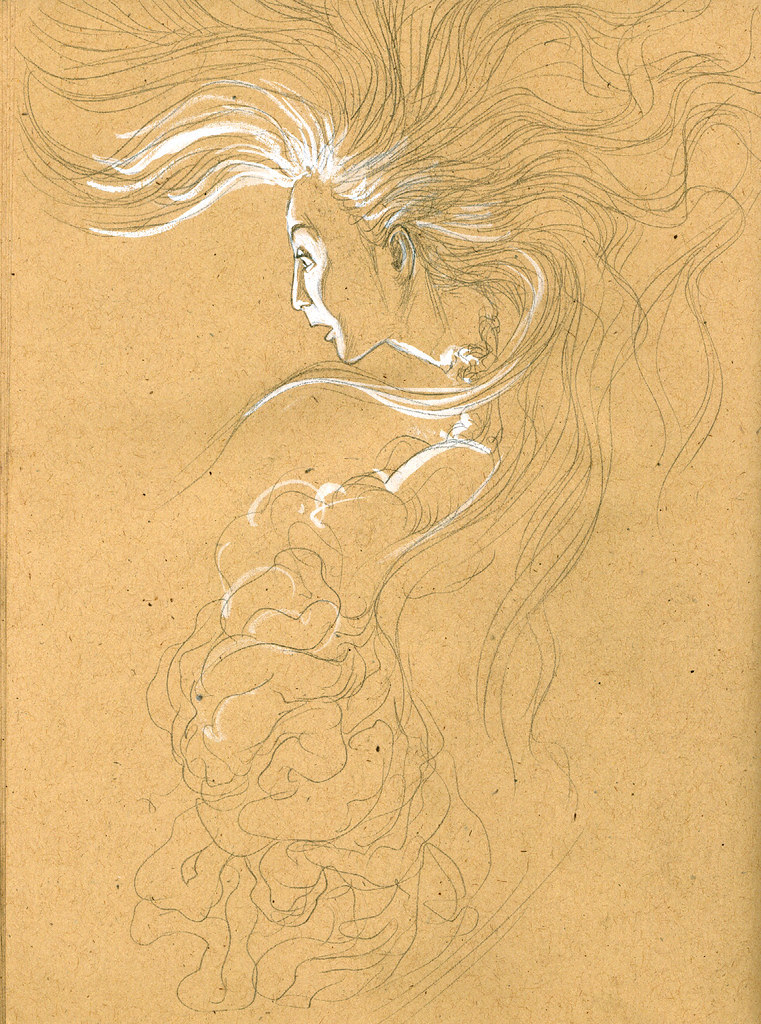 Above, on the right, is Penina- one of the Agony Goddesses from Agony a Go-Go, drawn with a mouse, in Photoshop. There was a time when I drew everything with nothing but a mouse. I got fairly decent at it, but as soon as I bought a drawing tablet, I was spoiled and could no longer draw with the mouse. Once I bought a Wacom flatscreen tablet, I was spoiled again, and could no longer draw on the drawing tablet. Anyway, on the right was a sketch for a new version of the Penina illustration.

Well, this was just a sampling of the many drawings of the Penanggalan I have done. Maybe someday I'll actually produce a finished piece of the subject.