I had a better imagination when I was a child. It wasn't limited by my adult need to argue and crunch everything into the confines of plausibility. A monster consisting of a giant mouth the size of its body becomes the internal discussion: "Where is it's stomach? How does the jaw work? How does something with teeth so massive even close its mouth?" And so on.

I find that I can't even sit down and draw a monster, because I find myself going, "What is this for? A story? A movie? How does it work? Where did it come from?," and to a certain extent, such questioning is good. It's nice to have some secret lore, some depth to the characters you're creating, even if they'll never be drawn again. My mind, however, has just been overly critical, and not in a constructive manner. I'm not producing stories or even neat characters that are the part of some untold story. I'm getting stuck before the pen or pencil can even begin to flesh out something new.

A few years back, I tried looking at my old childhood drawings, done back in 1973 or 74, when I was 3 or 4, to see if I could recapture some of that youthful creativity. Did I succeed? Ehhhh....nope. 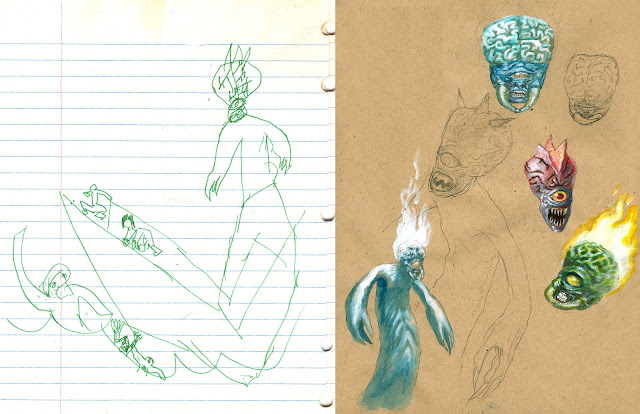 Flame Brain! I'm not even sure I drew it correctly. Are those flames on its head....or horns? The "brain" part likely comes from seeing a photo of the Mutant character from This Island Earth. I should try painting a version that makes him look giant, maybe even in the ocean, attacking the ship, like in the original. 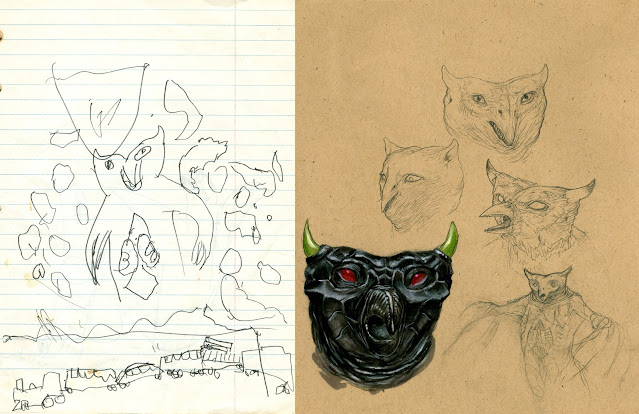 Black Beak! I'm not sure why I made him black in the new version. I can't be certain, but I'm pretty sure that the chest design was inspired by the Ultraman monster Gyango, or Gango. 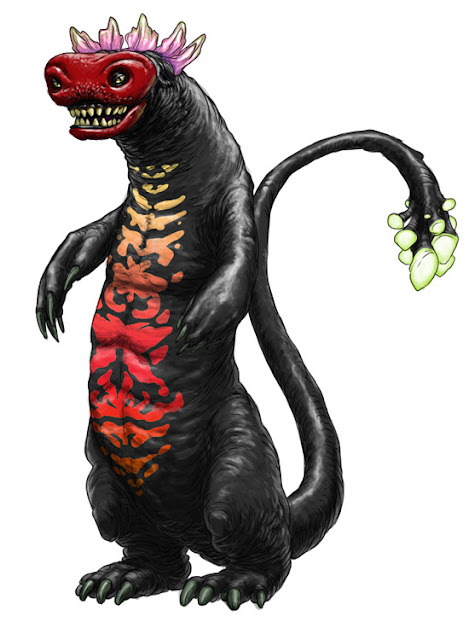 Puffy Red Face! Not much to go off of in the original drawing. Pretty sure he has a train car in his mouth, a la Godzilla. The full color Photoshop drawing was done in a rush, but I think it's cute. It shows absolutely no sense of scale, though. May as well be 5' tall.
Recently, I went back in and tried a couple more re-draws: 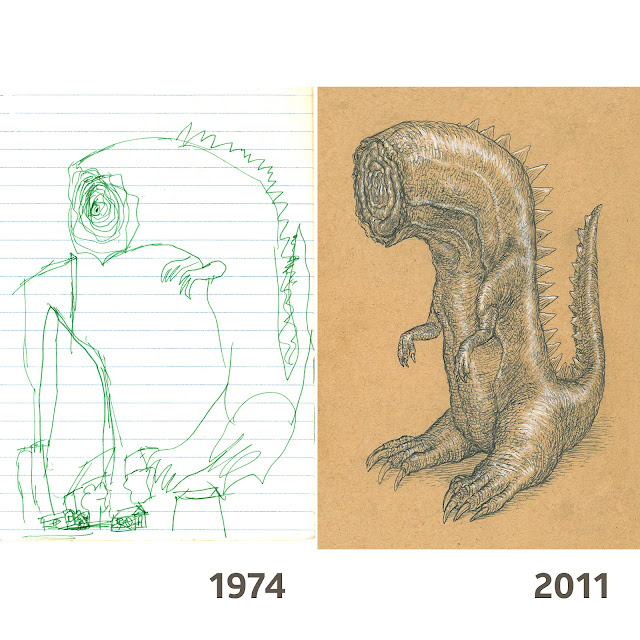 Nightmare Monster: This headless- or faceless- creature appeared in a nightmare back in 1974. It appeared for only a second. I was standing in my doorway, looking out into the lit hall when it just flashed into existence. I woke up right away. So, I drew it the size of Godzilla, but it was actually about my size at the time, since I remember seeing it straight on. I  drew it all wrong in the original- it was much more squat, like an H.P. Lovecraft moon beast- but I've re-drawn it here to match it. 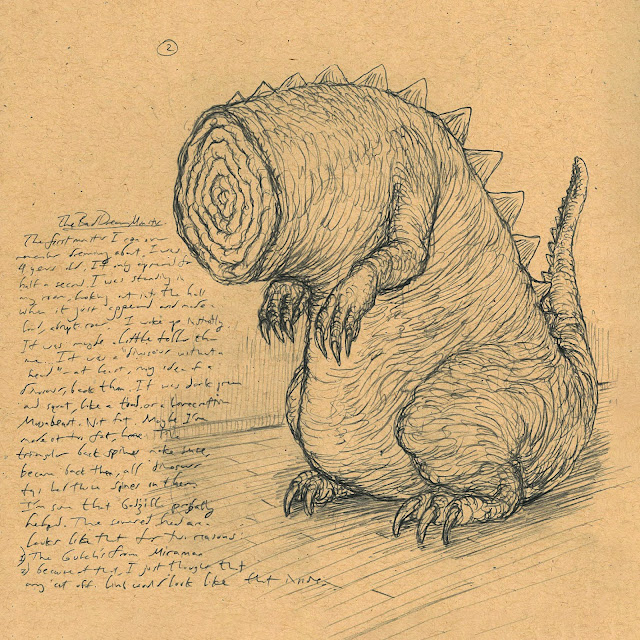 The drawing on the left, above, is more like it was in the dream. It didn't move at all. It's skin was green, and the "cut off" area was red- but not from blood. The puffy, ringed look comes from these monsters from a Japanese series called Red Baron. They were these plant-like monsters that had hands that looked like the cut-off head, here. The fat T-Rex version on the right....well, I don't know where I was going with that.. Above it, cropped off, is a dream I had recently about my brother, Paul, but that's another story.
My nephew, 5 and a half years old, inspired by my brother, Paul, has been drawing monsters. Here, though, is one he drew after seeing my drawings of the yokai Dodomeki and Hyakume: 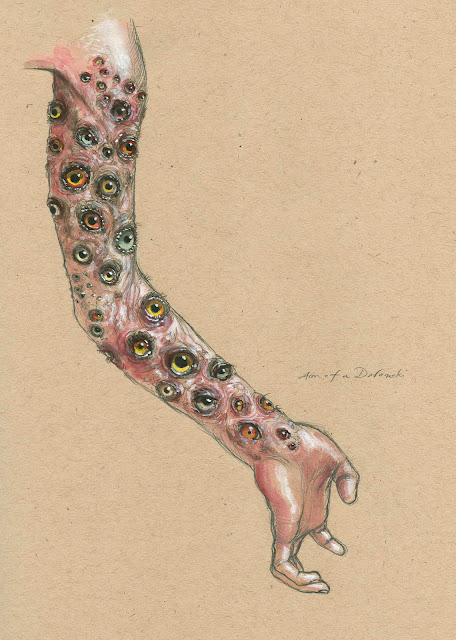 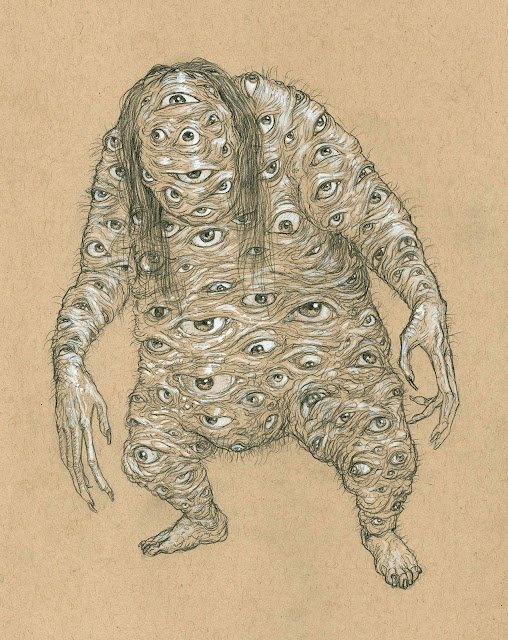 And here is his version: 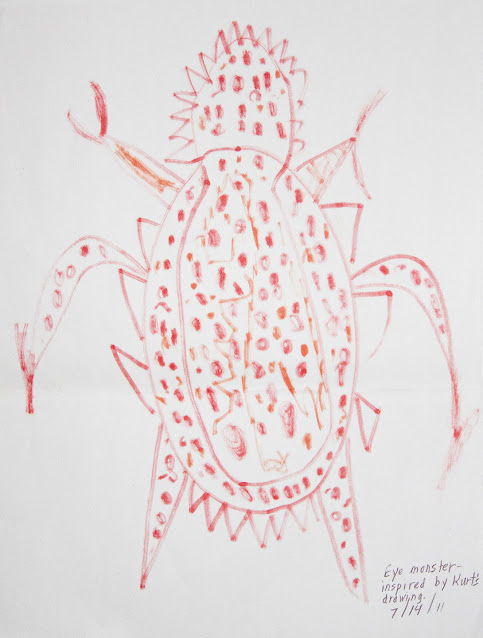 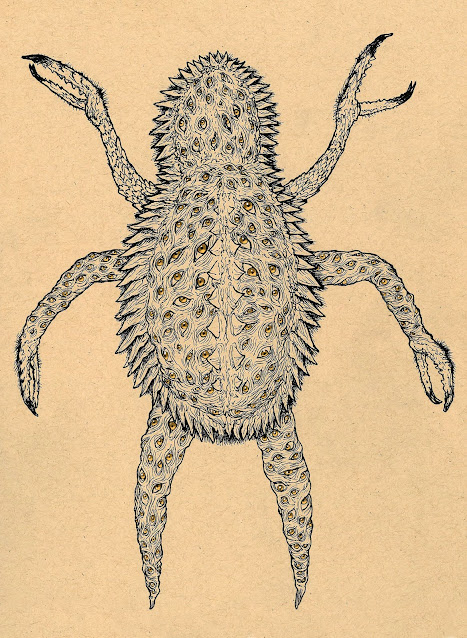 It kind of has the body of a horned toad. The way I drew it, this is a top view, and it lies on it's belly, like a horned toad. Upon reconsideration, I doubt that that was what my nephew intended.
Finally, we have Gearis. An original creation by my nephew- and my version, based on his drawing: 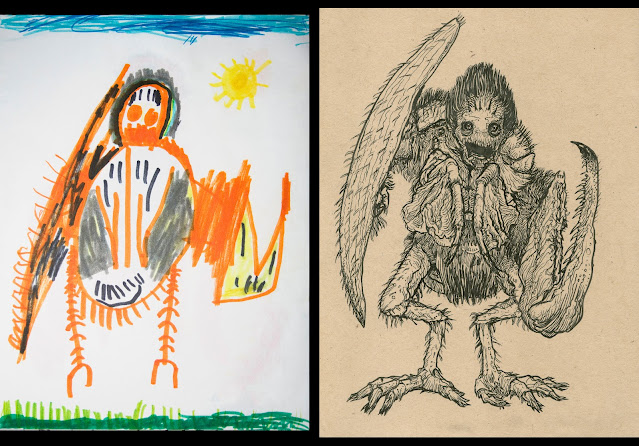 I think I should have drawn the legs to be more like his. A friend saw this and, from the thumbnail, thought that Gearis was holding a saxophone in one hand.
I intend to re-draw more of my childhood drawings, but I really hope I can get out of this damned slump and start producing some work of my own for something good.
Posted by Kurt Komoda at 5:08 PM