Cathedral Head is a monster I drew back in 1975. I didn't call him Cathedral Head- that's just the lame name I came up with recently. I believe the 5-year old me was inspired to draw the cathedral window-like single eye after seeing my father create a six-pointed rosette with a compass. You know, that basic trick where you're creating arcs around the circumference of a circle.

Here is Cathedral Head amongst a throng of monsters who are currently being attacked by Eagles, from Space: 1999. Here is a second drawing of Cathedral Head, this time he's battling Ultraman. Arashi, a character from the show, can be seen in the lower left, firing his Spider-Shot atomic gun at a monster, causing it to bleed. The Science Patrol's VTOL aircraft can be seen in the sky, just above Cathedral Head's shoulder. A flying saucer is depicted soaring away at the top of the drawing. Masses of  people are trying to escape the city as Ultraman protects them. Since I cared enough about Cathedral Head to draw him at least twice, when I was five, I figure that it's about time that I revisit it. I'm pretty sure that I drew more pictures, but I can't find them. Below is my first attempt to modernize it, but I don't like the way I've drawn the scales.  They're very sloppy. The claws don't seem very practical for much of anything. I'm trying to figure out a good anatomy for a giant humanoid creature- something to make it look BIG, without having to draw small buildings next to it. I think that the scales should be more patterned, more structural, like those on the head of a horned toad: 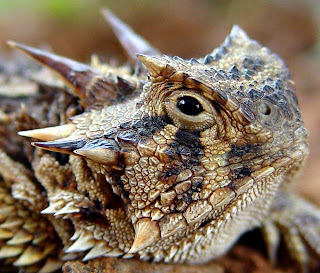 Here were some attempts to implement that thinking. Don't think I succeeded, but I'll try again. I kept falling asleep while drawing the ink version in the upper right. There are some errant lines here and there, that I tried covering up. I have this horrible thing where I often get very drowsy when I draw. I need to do a full color version. My thinking is that the "window/eye" is lit from within and will be lavender, but that may change. I may actually color it like a cathedral's window, but I'm not sure how literal I want to make it. A giant demon with a head resembling a cathedral is certainly worth exploring, though. Hmmm.
Finally, here is a doodle I drew last night, right before scanning in these sketches. Not sure what it is. She has something to do with the completely non-existant Cathedral Head storyline. I like the way she came out, though. It's as if there's some afflicted cult or army that follows Cathedral Head around, destroying things in its path or wake.